These are the people

Now I love Sesame Street. I love the Muppets. I love Jim Henson. All of these things were a major part of my childhood. These shows introduced me to so many things – not the least of which is my sense of humour.

I still remember my Big Bird record player and the Sesame Street Fever album I played on it.

I managed to find a partner who shares the same nostalgia – to the point that we included Bert and Ernie in our vows. And had But I Like You on our wedding playlist. We also having close to matching Bert and Ernie tattoos.

Not surprisingly, then, our daughter has been surrounded by Sesame things since she was born, and we all enjoyed a trip to Sesame Place when she was smaller. 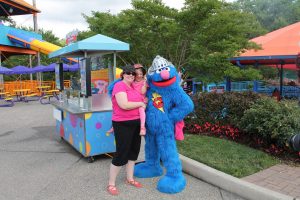 Sadly, she went full Elmo, but it’s a generational thing.

As we watch this short celebration hosted by Joseph Gordon Levitt I gasped out loud multiple times. The kid asked me why I was surprised so much, she didn’t understand that I was gasping out of pure excitement. Seeing all these characters that are parts of my memory was just joyous.

The Amazing Mumford, Sully and Biff, the meep meep aliens, the little girl who goes to Hooper’s store to get a loaf of bread, a container of milk and a stick of butter.

Of course, as I’ve grown older it’s not just the characters that have become special to me, but the actors and Muppeteers behind them.

Not only is the man Grover AND Bert, he was also Yoda and has directed multiple movies that I have watched and enjoyed.

It’s not just about nostalgia and characters – I read Street Gang, the book about the origins of the show, and there was so much intention in it. The show had it’s own curriculum. The creators knew that kids were watching more television and they believed they could use that time and attention to educate. Particularly to educate kids who weren’t being put in fancy preschools and whose parents didn’t have the time and support to teach themselves.

The only Spanish I know comes from watching Sesame Street.

In my day it taught us about death and grieving, there was a show after 9/11 and one on the devastation hurricanes can bring, and now it teaches kids about autism and the opioid crisis.

It amazes me that this show could accomplish what it does while also sparking so much joy. Generation after generation.