At the end of March we brought Frank the dog into our home.

I found him while looking but not really looking for a rescue dog, because I wasn’t sure the family was ready for a dog that wasn’t Henry. But there he was. We drove all the way to Toronto to meet him and he came home with us that very day after a very pleasant introduction. 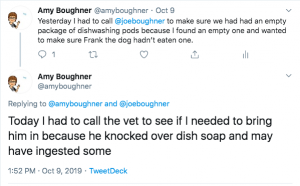 It hasn’t all be smooth sailing – I have documented his trouble-making on Twitter as we try to figure out how to keep him out of trouble.

It is very difficult to keep him out of trouble, but several people have recommended I get a camera and create a YouTube channel for him.

He is very troublesome but also very cute, it might be a money maker.

Still, we try to be understanding. He was a street dog. We don’t know how old he is or how long he was living on streets of Colombia – he seems to have belonged to somebody at some point, given his cropped tail – but we know that he had to be very resourceful to survive that time. We also know that being in Canada and living with a family after going from the street to a farm must be strange.

He has been settling in. He seemed fairly comfortable with us from the start, but I think the mischief he has been getting into is more proof that he knows he’s safe here, and this is home.

Recently I was doing some re-arranging and I moved a chair from my office into the master bedroom. Frank has now claimed this chair for himself. 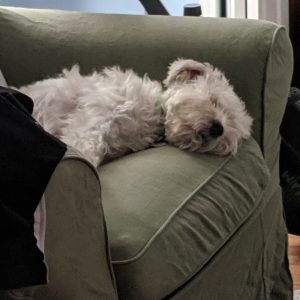 Sometimes he’ll sleep in bed with us, often he’ll sleep on the floor, but now the majority of the time he sleeps in the green chair.

In fact, when we’re at home, he spends most of the day in the chair, relaxing.

It amuses me, because it is so different than the chair he has claimed for himself in the living room, which was the chair that was always reserved for my Gramps when he came over. It’s a sturdy wing chair with wooden arms.

The green chair is soft and cuddlier. And, I guess, a great place to catch a few zzzs, flopped this way or that, able to keep track of everything that’s going on in the bedroom as well as in the hallway and up the stairs. From that chair he can see the door to the kid’s room, whether she’s coming or going. He can see anyone on their way into or out of the bathroom. He can hear anything that’s happening in the backyard and whether next door’s poodles are out to play.

Yesterday I was doing some work on my computer and I decided to sit in the green chair. I had been sitting in the bed, but wanted a different place and a little more back support, but I didn’t want to be sitting at my desk. Soon I learned that maybe it was not my place. 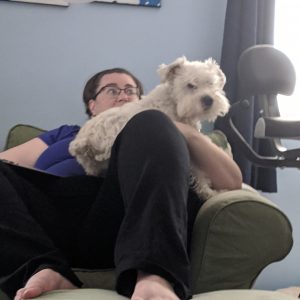 If you sit in the green chair, Frank reserves the right to sit on you.