I was driving in to work once day last year with the Broadway channel on my satellite radio and on came a brand new song from a brand new show that hadn’t even opened on Broadway yet. The song was Waving Through a Window and it immediately meant something to me.

I learned a bit more about the story, I bought the soundtrack when it came out, I bought tickets when Joe and I were planning to go to New York last November. And then sold them when plans had to change.

And then this year I decided I had to do it. With Joe’s support I planned a trip to New York City and I bought myself a ticket for Dear Evan Hansen. I desperately wanted to see the show before Ben Platt leaves. He’s been playing Evan for the run of the show and won the Tony last year for the role. 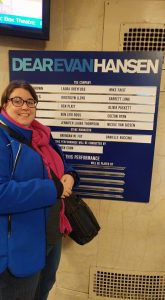 His last show is this Sunday.

I knew from the soundtrack (and his role in Pitch Perfect) that his voice is incredible. I cannot begin to explain how amazing and brutal his performance was.

The story of this show is very close to my heart. Evan is a teenager who struggles like I struggled as a teenager. His mother is a single mother.

Ben Platt expressed in his performance all the pain and confusion I remember so vividly. I had a theatre experience I will likely never forget, and I can’t even really explain why.

I cried throughout the show, and I was not alone. The man beside me explained, as he wiped his eyes at intermission, that he hadn’t expected this.

I expected it, but I still really didn’t know what I was in for.

I would watch it again right now, and tomorrow, and the day after.