My brain has slowly been working on something over the past few days, trying to think this through based on all the information that’s come at me since budget day.

You see, I went to a panel the day after budget day and listening to some great minds, and I also read a bunch of post-budget analysis, and I’ve been paying attention to poli-twitter, as always, and watching a committee filibuster – because who doesn’t love a good filibuster – about changes to House procedures.

I have come to the understanding over the course of my life that many people don’t know what going on Ottawa, don’t understand it and, sadly, just don’t care. Our current Prime Minister knows this well. That’s part of the reason there’s this debate about changes House procedures – to make it so that he doesn’t have to spend as much time here, but rather can go out and about across Canada to meet with quote-unquote average Canadians (or middle class Canadians, or whatever the polls show is the best political language to use right now).

I have been thinking about this – this common knowledge that the current Prime Minister doesn’t like being in the House of Commons and thinks his most important work is done elsewhere – and then came a Saturday morning Twitter conversation that was really fun to follow (if you’re me). 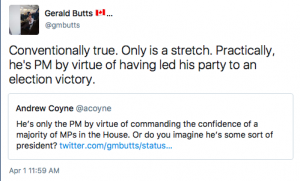 Andrew Coyne, very smart national columnist who has been covering federal politics for the length of my memory, and Gerald Butts, long time friend of the PM and currently working in the PMO, one of the masterminds behind Trudeau’s campaign and one of his closest aides.

Coyne wrote a Saturday column that got a good amount of debate on ‘official Ottawa’ Twitter. It was fun to watch – if you’re me.

The rub is this – elections in Canada now run as though Canadians get to elect the Prime Minister. The campaigns have long focused on the leader of the parties and a lack of real civics educations means that a lot of Canadians vote for parties to elect the leaders rather than voting for their local representatives. Of course, once all those local representatives get to Ottawa they tend to tow the party line. It is the rare few who focus on what’s best for their constituents, so who can blame Canadians.

But we are a Westminster system, and that means that the Prime Minister is the man (or, hopefully soon, woman) who holds the confidence of the House of Commons. This is almost always the leader of the party that has won the most seats.

So regularly is that the case that when a coalition of parties who promised to maintain confidence suggested to the Governor General that she give them a shot the reigning PM went to the public saying the move was unconstitutional and a lot of Canadians believed him, even though it was a blatant lie.

So here’s the question: We know that Prime Minister Trudeau has no love for the House of Commons, he’s demonstrated that he thinks his time can be better spent elsewhere, and his party is now working on changing House procedure. We know that Trudeau currently holds the confidence of the House, by virtue of a majority government. We also know that Trudeau has broken some promises that have made many Canadians who voted for him angry *cough* electoral reform *cough* and that Liberal MPs are hearing from angry constituents.

All I’m saying is this – a PM who spends as little time in the House as possible, MPs who are hearing anger from constituents and maybe start to feel a bit neglected, two power-hungry parties on either side. This could get interesting.