There was a bit of a kerfuffle in the Niki Ashton campaign last week when a meme was posted on her Twitter account (whether that came from her or someone on her team, I don’t know). The meme used Beyoncé lyrics to demonstrate Ashton’s goals for the party – that it should move to the left, to the left.

She was accused of cultural appropriation. She then apologized and deleted the tweet. (Or her campaign did, if you prefer).

This I understand. To be accused of something like cultural appropriation, akin to racism, the first reaction should be apologetic, with an attempt to understand the mistake. But what I don’t understand here is the mistake.

I have vague understandings of cultural appropriation – Don’t wear things that actually mean things in a culture and its history when you don’t understand them and have no right to them. Don’t wear a warrior’s head dress when you haven’t earned it. Be inspired by these things, but do not take them as your own. 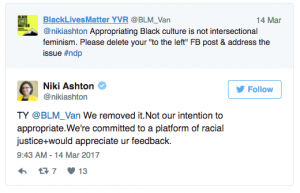 What I fail to see is how lyrics written by Beyoncé, Ne-Yo and two Norwegians in a song about kicking a man out of her house for disrespecting her is a defining part of black culture.

Another misunderstanding came when someone on Facebook asked whether white people should be allowed to wear moccasins or mukluks. While I understand the desire for white people to understand the how and why these things are made (which is pretty interesting and a beautiful art, by the way). But if you ban white people from wearing these things, are you helping a peoples history, or harming the craftspeople who are making them to earn a living?

Further, what do we gain from blocking white people access to great black artists like Beyoncé? The woman is the voice of a generation, a strong feminist.

Speaking as a white women (a place of privilege that I acknowledge), I understand the benefits of listening to other cultures, and I hope that my own heritage doesn’t become an issue in my desire to interact with black artists – or those of any other culture. What better way to reach understanding than by listening?

Reading the further tweets of Black Lives Matter Vancouver, their argument, when they weren’t calling it cultural appropriation, was sound: 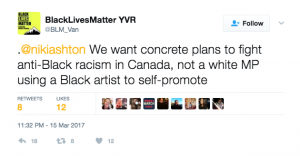 Show us you are fighting for us. Don’t use people from other backgrounds as a prop and then ignore them when it matters. Totally fair. To label it cultural appropriation in the first place got the group the attention they may have sought by doing so, but it is also a war cry that turns a lot of people away from the left.

Ashton’s apology was widely mocked by the right  – those who point out that the left can never get anything done it is so busy falling over itself to be politically correct. This is a problem, this desire to be absolute open to everyone at all times and never hurt anyone’s feelings.

The desire to not cause hurt should not be a detriment, but in the world of President Trump and a right wing that often doesn’t give a damn about anyone if it’s not in their own best interests it makes success a battle.

It will be interesting to see how Ashton’s campaign continues through the leadership vote. She is not my choice, but she certainly will add something to the race.

National Post: Explainer: Is it cultural appropriation when a white politician quotes Beyoncé to boost her campaign?