Skip to Content
Home Parenting Flips, twists and turns
by

I was never a sports person. I wish I had been, but I was clumsy and tended to hurt myself. As soon as I was allowed to drop gym I did.

Why I ever thought I’d do well in a degree program where playing sports was part of the curriculum is beyond me, but 19 year old me refused to look at it that way.

Even though I never excelled in sports or the arts, every time I watched the Olympics I wanted to be one of those people. I wished that I had dedicated myself to something. I wished that I had found solutions for my weak ankles or stuck it out in gymnastics, or paid more attention in tennis camp. (My father, a former tennis coach, paid for two years of tennis camp at his club. I don’t remember ever playing an actual game against another person).

When my daughter was born I made the decision that we would put her in all sorts of different activities and see what might stick. I didn’t want her to wonder like I still sometimes do – what if I had joined the rowing team in high school when my friend suggested it?

We started swimming lessons as soon as we could register – partly to get me the hell out of the house during my maternity leave. I took her to gymnastics when she was about eight months old.

She started skating lessons with Daddy when she was about two. 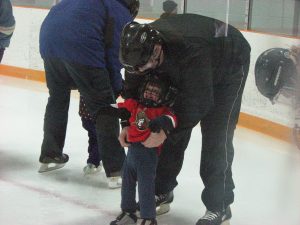 She’s done t-ball and ball hockey, cheerleading and ballet, acro dance, she didn’t like hockey, but she loves to run, so we put her in soccer. 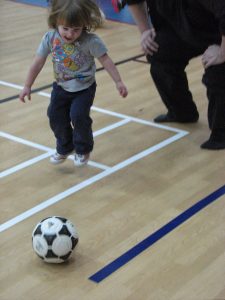 She loves to run, bike, cartwheel, whatever she can do to move as fast as she can. And, of course, she trampolines. 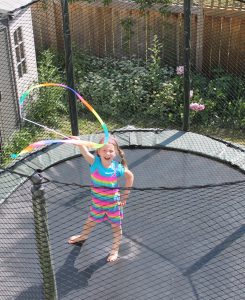 So now we know some things are her things and some things are decidedly not. And I know that she wants to go to the Olympics in gymnastics and then, once she’s aged out of that sport, as a member of the women’s soccer team.

My daughter, at 6-years-old, is already over four feet tall. The other day I did a search for the tallest ever Olympic gymnast and that was Svetlana Khorkina, who was 5’5″

My daughter is probably going to be taller than Simone Biles – 4’8″ and currently the best gymnast in the world – by the time she’s 8 years old.

I have tried to gently explain this to her. I mentioned than right now she’d be about shoulder-height to the amazing Miss Biles. She said that she’d like to meet her someday to see how much taller she is – because she’ll be standing on the podium above her.

I don’t know if my kid is going to make it to the Olympics. I have a feeling if she does it won’t be in gymnastics. But we’ve explained to her the work and dedication that goes into a goal like that, if that is to be her goal.

But really, I can only be impressed because being an Olympian never felt remotely like a possibility for me, and her is this little girl who declares that she will be one, someday. (And if she does make it, then I have all of these adorable pictures for the montage CBC will put together).