I was listening to the Rupaul podcast on my drive in to downtown for a meeting today – yes there’s a Rupaul podcast, yes I listen to it, go forth and be fierce.

Rupaul and co-host Michelle Visage were talking about teenager-hood and the dark places it can take you and how you have to let your kids follow their path our of that darkness. Just because you know they’ll be okay doesn’t mean they know it – they won’t believe you because they feel different than every other person on earth. But we all go through our struggles and figure out who we’re supposed to be eventually. Teach your kids trust in that process.

By my Grade 13 (OAC) year things had changed dramatically. I had a plan. I was working a co-op and found that I loved working. I was applying to universities, I knew who and what I was going to be. I was on anti-depressants and I had great friends. I was still pretty sure I’d never date anyone but I was okay because I was going to travel the world.

I graduated in June, I worked all summer, I left for Toronto to start at university and before classes ever started I was back home. Everything in my body and brain was panicking, telling me that I had made a mistake. This life plan I had pieced together after my great co-op and my love of hockey was not going to work. It wasn’t a fit. I thought I was one thing and it turned out I wasn’t and then I spiralled.

It took me a month to find a retail job, it took me four months to decide on a new path, but by my birthday I had a plan and a college acceptance, and that’s when I went into journalism school.

I love journalism school and I was good at it. I was at or near the top of every class, I had natural skills (for everything but photography). I had instinct and I wrote fast – they put me on breaking news and I loved the rush. I had found my place and I felt good. Until I graduated and it took me two months to get hired. Once I was out in the real world of constant work for shitty pay I loved journalism a lot less, and without feedback I wasn’t as good at it either.

No one told me there would be that many bumps in the road.

After my second job at a local paper with terrible hours and a terrible salary I decided to go back to school and get some sort of degree, finally.

And there all of the pieces fell together. The piece I had missed in college – I love politics more than most people – led me to my degree program. The journalism skills I had led me to the student paper where I found my people. One person in particular found me. 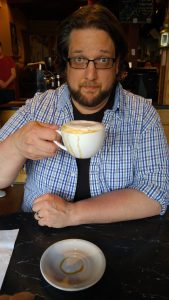 We moved in, got a dog, got married and had a kid – the most awesome kid. All things I never thought I wanted. Stupid Joe and his trickery. 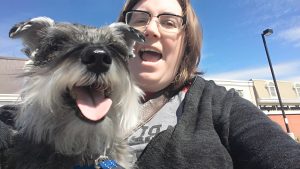 Other great podcasts, just because:

Another Round – two great, funny black women talking about race and feminism, necessarily uncomfortable for a white woman sometimes.

Sword and Scale, Casefile  – if you like true crime, and I do. Casefile has the added bonus that the host is Australian.

If you listened to Serial you should catch up on Undisclosed and find yourself saying “why didn’t they bring this up on Serial?!”

No Such Thing As A Fish, the QI podcast, full of useless facts and weird trivia.

And I always recommend This American Life, but now I assume most people have already heard of that one.