Supporting Youth in the Toughest Years

I have a vivid memory of sitting in the corner of my family kitchen sobbing. I was in the midst of one of my worst ever bouts of depression. I was lost. I had graduated college with high marks but couldn’t find a job. I didn’t have any friends in town so I had gone from being social every day to be alone most of the time. I sat there sobbing and hoping someone would find me and help me before I spun into the void even more.

I had been on anti-depressants before. My father knew I was in crisis, had considered suicide at 16, he threatened to tell my mother if I didn’t talk to her. So I did, through uncomfortable tears, and I went to the doctor and she gave me a prescription. 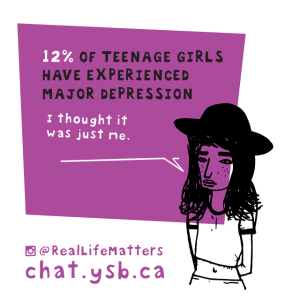 I got out of that place, but not fully away from that problem. I suffered from postpartum depression, I’ve had struggles since. But I survived being a teenager, and that was probably the hardest part.

So now I turn to those who are still trying to survive the hell that is high school with a mental illness. 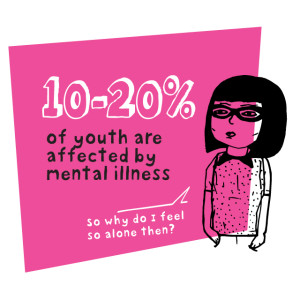 Ottawa’s Youth Services Bureau is creating a tool to help teenagers going through what I went through. When I was approached to support the project I jumped at the chance. The Youth Services Bureau has launched a online chat tool (chat.ysb.ca) as part of their #RealLifeMatters campaign to help kids in crisis reach out and talk to someone where they are most comfortable.

The chat, which was designed after research found that a lot of teens would be more comfortable communicating the problems they are facing that way, is available Thursday to Sunday from 4 pm to 10 pm. The bureau also has a walk-in clinic and telephone crisis line.

The chat line is a safe space for teens to express themselves and talk openly about the tough things they’re going through.

(Furthermore, right now the Youth Services Bureau is running a text to donate campaign for emergency shelters for youth in need in our community – Text YOUTH to 20222 and you will be prompted to select how much you want to donate).