Skip to Content
Home Parenting A lady, her daughter and a Rainbow Loom
by

Last year we inherited a Rainbow Loom from a friend who’s son wasn’t interested anymore. We decided to put it away for a little while since the kid was only four at the time, and many people told me that using the loom requires a fair bit of patience and dexterity.

For the past week she’s been asking about it, so Joe finally brought it upstairs and yesterday morning she and I sat down with the loom, the bands and the instructions and the little hook that makes all the magic. Once the instructions proved a bit too confusing we brought out the iPad and looked up some tutorial videos.

What I forgot before starting this project was that the kid and I should never do something fiddly together if it’s the first time either of us has done it.

All my life I have had a habit of wanting things to be easy right away. I understand that is stupid, that things have to be practiced, skills have to be repeated to be learned. I just want to be good at it. Now.

This is something that my daughter happens to have inherited from me. Other people can make fantastic things from Rainbow Loom, why can’t I. On my first try. Because other people can do it.

And despite the fact that I went through the exact same learning curves with the exact same frustration when I was a kid, I get frustrated with her for not understand what it’s taken me 34 years to learn (and I still have to remind myself).

Three tries later, watching and re-watching the video, tearing off the bands and putting them back, we had a bracelet that didn’t fall apart. 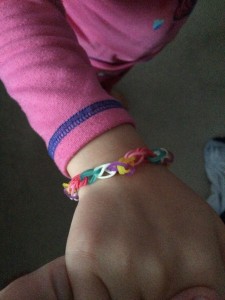 Later in the day, after picking her up from camp, she informed me that using the Rainbow Loom was easy and she wanted to make all kinds of different things. That she gets from Daddy.