Skip to Content
Home Health What is fat?
by

I knew it was a conversation we’d have to have eventually, but I didn’t plan for it so soon, and I didn’t expect the trigger to be Socks the cat.

We’ve been reading a lot of Beverly Cleary – the entire Ramona series, Ribsy and Henry and Beezus – and I thought Socks would be great because it’s about a cat. We can’t have one, but the kid still loves the idea of them. I’ve learned that with Beverly Cleary’s older books (published in the 1950s) there are things we might want to read around – holy gender stereotyping! – but generally we’ve done okay.

And then someone came to visit Socks’ owners new baby and said the cat was fat, and Mrs. Bricker decides that she and Socks both need to lose some weight.

“Why do people need to lose weight? You get bigger and grow and be healthy,” kid says matter-of-factly. And she’s right, that’s what we’ve always told her. She knows that some food is healthier, that eating the right foods is important for strength and energy. She knows that she’s growing and getting bigger. She knows we focus on her growth. 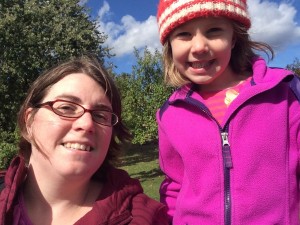 So why would being big be a bad thing?

It was bedtime, the end of a long day, not the right time to get into the fat talk with my daughter. Should I use myself as an example? That sometimes people are not healthy and changing the way they eat can make them healthier? I will try to stick to healthy vs not healthy. Fat does not mean healthy any more than thin does.

The fact is that my kid is healthy and she also happens to be skinny. She eats well – loves fruits and vegetables. She’s tall and keeps getting taller. Sometimes I wonder if people think she’s not mine there’s such a difference between us. She loves being active and she’s very strong. She has set herself a great path in life. One I don’t think I was ever on. I am one of those unhealthy people who needs to lose weight. I have been most of my life. I’m not as good at being active or eating the right things the way my kid seems to naturally be.

I’m not ready to colour the way she sees the world like that, and I’m trying to figure out a way to explain it that won’t, but I’ve got a whole culture to fight against.