I have been thinking again about people in my past who may not realize the change that they created in my life, as per Drew Dudley’s closing keynote at Blissdom.  This comes from current events. I was recently hired for a regular contract. It’s been my goal since I left my full time job to work from home, and the person hiring me is one of the people I have to thank.

Since I knew American Thanksgiving was coming up, this seemed as good a time as any.

One person, Laura, I have thanked in passing a few times, but I don’t think she knows the full extent of the help she gave me.

She hired me for my job with the party. It was a short contract, or it was supposed to be, and my confidence level with my work was in the crapper, but immediately Laura became a person I did not want to disappoint, and when I felt like I was disappointing her we sat down and talked.

Working with her and the team in that office helped build me back up bit by bit. I was surrounded by smart, talented people and I wanted to prove myself among them, so I worked very hard to be everything they needed and more.

Anne Marie was the woman I replaced. She was wanting to move on and she took a leave and I got to replace her. When she moved officially and permanently into her new job and I officially and permanently took hold of mine she came to say goodbye and I surprised her by getting a bit teary. The moves she had made in her life had changed mine for the better, and she didn’t even know.

Ian and Gaby were two people who were constantly supportive and full of energy. Karl was someone who scared the crap out of me and made me better at finding answers for fear of disappointing him.

And then there was Kathleen.

Kathleen took over where Laura left off. The two of them together turned me into a much better employee, a much better worker, and pushed me to excel, and someone I am proud to be today.

Part of a legacy. 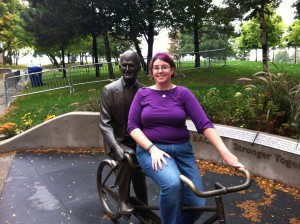