Last summer my great uncle passed away. He was in his 90s, the middle brother in my grandfather’s family. The youngest brother died over a decade ago. My family lived close enough to my two great uncles and their families that we got to see them often. My Uncle Gilling and my Gramps got closer after Uncle Paul died and the both lost their wives, so we saw him more and more frequently. 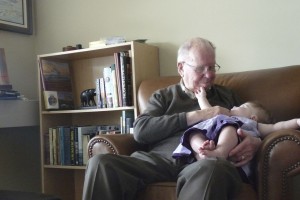 Gramps was in the Navy in World War II, he enlisted when he was 19.  His brother Gilling was in the Army and Uncle Paul was in the Air Force.

Just imagine my great-grandmother sending her three sons off to war so soon after watching the world crumble in World War I.

When we mark Remembrance Day I usually think of that, because thinking of all the men and women currently in the Canadian Forces, being sent to places like Syria and Libya and Sudan, is so very hard.

I try hard to believe that our country is worth their sacrifice – their time and strength, their sanity and potentially their lives. I try to live my life and raise my daughter so that we are worthy.

I don’t think that’s too much for these men and women to ask.