Skip to Content
Home Personal A very bad thing
by

A very bad thing happened in Ottawa today. A very bad thing that resulted in 6 dead, more injured and a lot of questions. A train and a bus crashed, somehow, at Fallowfield.

Usually I would have no reason to be anywhere near Fallowfield. This morning, I did have a reason. Joe was heading to Toronto, taking the train, and the kid and I were dropping him off. She wanted to see the train, then she needed a bathroom and that’s how I ended up watching the train jump the tracks on its way into the station.

I found Joe, we re-grouped, the kid and I went back to the car and that’s when I found out that the situation was much more than what we had seen. I only saw the train, Twitter told me there was a bus at the other end of what I was seeing. I spent the day trying to stay up to date.

It was a very bad thing, and it was much worse for a lot of other people than it was for me. I saw something fairly innocent, others lost family members, saw the dead, experienced the terror.

But I can’t stop going back to that one moment…

I turned, I saw the train, I saw something was wrong, it was coming in at an angle. Was it slowing down? Was it going to stop?

I didn’t know what was happening or why, but I knew that if that train didn’t slow down or stop it was going to hit the station, and I was standing there with my daughter, and my husband was standing next to the tracks.

I’ve been walking around in disbelief at being there, in that place, seeing that. I’ve been thinking about my whole life – my family, any part of it – just get wiped out.

The kid doesn’t know what happened beyond what she saw. She knows that something went wrong with the train, but that’s all. I think. 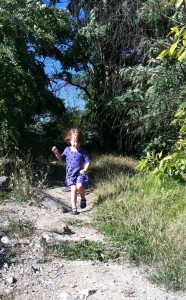 I’m just shaken, confused, thankful. Something. Not sure how I’ll feel in the morning.