We’re doing preparation for preschool. Kid starts next week. She also just started sleeping without a nighttime diaper. This has a lot of people – family and strangers we have conversations with – talking about what a big girl she is. 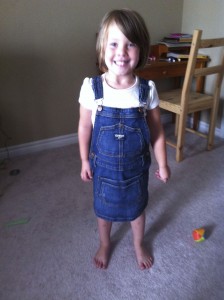 And as soon as someone says it she fades.

She loves everything she can now that she’s growing up, but she’s scared. She told me so. She’s scared to be a big kid. At night she tells me she doesn’t want to be alone.

She asks when she will go back to being a baby and gets upset when I tell her that won’t happen. She breaks my heart.

She loves to learn, she loves to be more independent, so why is she so scared of taking this steps when we’re right behind her?

She wants to go back to being a baby, she’s scared of being alone, she wants me with her, and then two sentences later she wants me to remind her when she’s going to be allowed to get her ears pierced.

She goes to bed and then comes out of her room and asked if it’s morning yet. She wants everything fast and slow.

She wants to go back and forward.

She wants my help and to leave her alone.

I have a feeling there’s going to be a little bit of this always and she makes my heart ache. It seems as though every day we go through every emotion there is and we’re all exhausted by the time it ends. Except she’s not exhausted enough to want to sleep.

Someday she’ll figure out how important and nice sleep is. Maybe. Someday.

Meanwhile we’ll keep telling her how awesome she is, and how strong and how smart and how proud we are hoping that she’ll see more of the benefits of growing up than the trials and tribulations.