This morning I have been discussing this post with some friends online and thinking about it myself. The post is written by a father who has banned princesses from his daughter’s day to day life.

When I found out we were having a girl I had the same goal. No pink, no princesses, no gendered toys.

The thing is, my daughter? Turns out she has a fondness for pink, and she likes wearing dresses – frilly ones that twirl.

At first I tried to put her the other way, but then I thought a bit, and I realized something: When I was a little girl I played princess and mothered dolls and wore frilly, twirly dresses too. I had a pink bedroom at one point.

After having lived with my actual child for a few years now my ideals have softened. I want my kid to by my kid, and the fact is that with me as a mother, and Joe as her father, she’s unlikely to be a wilting flower who thinks that being pretty is the greatest accomplishment.

So, come at me princesses, I’m not scared of you. You won’t be the only influence in my daughter’s life. 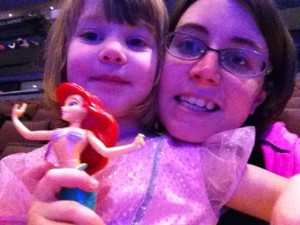 Ariel was my favourite too.