My town has been hosting the IIHF Women’s Hockey Championship this past week. I used to be the sort who didn’t believe women’s hockey could live up to men’s, but a few years ago I had the chance to see the women up close in Winnipeg and I realized how wrong I was. These women have power and skill and they are a pleasure to watch.

Joe took the kid to see Canada play Finland during the tournament this week and I made sure to tell her to cheer loudly for Gillian Apps, who is my personal favourite.

It was important to both of us that they kid got the chance to see women play the game so she knows that they can be just as good at anything they choose.

With this tournament going on in Ottawa and the approaching 2014 Winter Olympics in Sochi conversation has turned back to some comments around the last Olympics. There was talk that the sport is not competitive enough to be in the games – this because Canada and the US are always at the top.

Now the head of the IIHF says he thinks this week’s tournament has been enough of a display for the IOC and the sport will stay a part of the games, but we’ll have to wait and see. 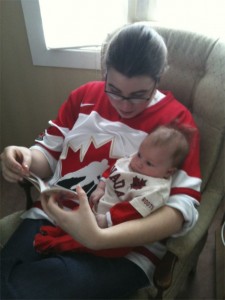 Before the gold medal game in Vancouver

Every time I hear this suggestion that women’s hockey is not competitive enough to be in the Olympics I start to get really angry. I don’t know why this issue bothers me so much, but it does. The fact is that if the sport was taken out of the Olympic Games, I firmly believe it would lose all momentum. The up-and-coming programs in countries like Finland, Russia and China would lose funding without an Olympic goal.

In Canada we are just entering a place where the women playing for the national team had women on previous national teams to look up to – Geraldine Heaney and Cassie Campbell passing the torch to Hayley Wickenheiser, now approaching her twentieth year with the team. (Yeah, I remember when Hayley Wickenheiser was a young upstart).

If the IOC does make the decision to kick women’s hockey out of the Olympics until it’s competitive enough by their standards I will be asking where to direct my angry letter.