So the kid turned 3. We had a successful party, she was happy with her gifts – and even happier with the balloons that are still floating around the living room. I tell her all the time that I love her more now than I did when she was a baby and that I’m excited to see her growing and I love watching all the things she can do now. Most of the time she’s okay.

But sometimes she wants to be a baby. She won’t leave diapers behind, she goos and gaas often and asked to be carried. It’s normal, I know, but then sometimes… Sometimes she tells me that she’s afraid to grow up, that she doesn’t want to be big. 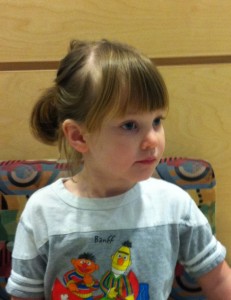 My heart cries out to her. If I could be honest with her I would tell her that I don’t want her to be big sometimes. That things keep happening in the world that I’m happy she’s completely oblivious to still. When I watch the news unfold in Newtown, she was asking me why I was crying and I didn’t have to tell her that children, little children had been massacred for no reason at all. This morning, as our neighbours try to come to grips with something truly terrible, I don’t have to tell her. I don’t have to send her to school where there will be counselors on hand.

When she looked up into my face yesterday and told me she didn’t want to get bigger, she wanted to be little, she had no idea the fears that I keep in my head about the world she’s going to have to deal with.

Already she’s had scraped knees and I’ve failed to protect her from more than one kid who told her she couldn’t play with this or that, she’s learning to deal with those things with some practice and some coaching.

How do I teach her to deal with the things that I can’t cope with?