I will often send Joe texts with quotes from the kid. I do this because she often says hilarious things. Or at least things that are hilarious or sweet to me and would be to him but that I won’t share with a wider social media audience for fear of becoming one of “those” moms.

Lately we’ve been having potty issues. Training was going well and now we’re seeing a total regression. She’s back in diapers and when I first brought them home she seemed upset because “babies wear diapers,” but then she called my bluff and jumped on board.

While changing a diaper the next morning we had the following conversation:

“Are you scared of growing up little girl?”

“But you’re doing a very good job of it.”

And just like that I’m lost again. I spend so much time in motherhood lost, but I’ve learned through friends (online and off) that I’m not alone being lost.

She’s this bright light. She smart and funny and she loves so many different things. She’s full of joy so much of the time and then she throws a curve ball. 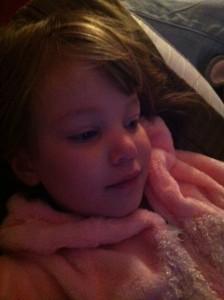