The kid will be officially two and a half next week. Sometimes she seems so much older, sometimes younger (particularly when she wants to be the baby, and be rocked like a baby).

We had, of course, heard a lot about the terrible twos prior to ever having a baby, but this kid has always been pretty good. Even when she was angry and throwing a tantrum it never seemed very bad – especially compared to some I have witnessed in my life.

Lately though, lately we have seen the rumoured terrible twos.

But in the middle of the screaming and thrashing, when she’s trying to hit, pinch and kick me, when she’s strapped into her car seat she will unlock the door with her toes – she actually once managed to get her foot under the door handle and get it open. Luckily we were in park. That’s when the child lock got activated.

Yesterday we were doing the touristy thing. The whole time I was in tantrum avoidance mode. When she got bored at the changing of the guard, I took a walk with her. When she kept asking to see something else in the Van Gogh exhibit I rushed through and let Joe and his sister take their time.

After dinner my Mom took her upstairs to have a bath and I was very glad to be away from her for a little while. But, as is the magic of the toddler, I missed her when she was gone. I went upstairs to see her, and I asked her: “How can you be so lovable and drive me so crazy at the same time?”

She didn’t have an answer. 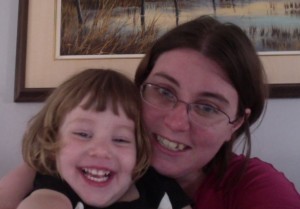 And then this morning there was a little face in my face to wake me up, saying good morning and telling me she wanted to get dressed and go downstairs, and talking a mile a minute before stopping to kiss me on the nose.