Skip to Content
Home Parenting #ToddlerLife Goals and Dreams
by

The Ottawa Senators are hosting their development camp this week, and it so happens that our new house is about two minutes away from the practice rink.We decided it would be a good idea to take the kid down to see the practice, since she’s inherited the hockey gene fully and completely.

She was smiling the minute we sat down and the boys started skating. She was even more excited to see the goalies. She just beamed through the practice and she couldn’t take her eyes off the ice for most of the hour and a half we were there.

We put her in skating lessons last winter, not necessarily because we want her to play hockey (though Coach Daddy would love it, I’m sure. Me, I’m totally impartial). I signed her up for skating lessons because it was something she and her Dad could do together and because I never really learned to skate and it bothers me. It’s a skill I want her to have. 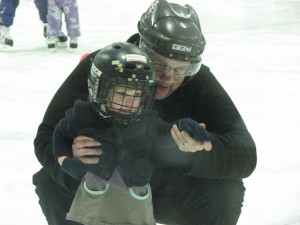 While we were watching the Sens up and comers practice the kid declared that when she was older she would be a “beautiful goalie.”

This is good, because I am partial to goalies. Goalies are the last line of defence. They are the solo player on a team. They’re a little bit kooky, but so is my kid – I mean she already said she’d keep her helmet white, and that’s just not the way this works. (Also, in the back of my mind: Crap, that’s going to be expensive).

Whether she’s a goalie the women’s national team, or the loudest cheerer at an OHL game, I’m proud to watch her love the sport that changed the course of my life and sort of proud my husband and I together. As long as she cheers for Canada.